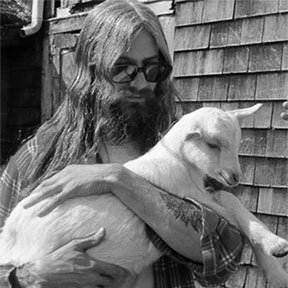 Gunsho– The manifestation of a failed American pubic school system within all of the mercurial modalities of definition– filtered through the mildewery of basement bliss, the eye-holes of a cracking latex Richard Nixon mask, and the adolescent frustration of trying to salvage a swampwater-logged Hustler Magazine.

Tripolarized by Pavlovian school bells and daily isolation from his peers, a young James Quigley phased into a demonological perspective and turned to his inner visions where architects of human tormentation could someday be revealed through a blacklight lens as scatological caricatures accompanied by invisible poopaganda and psychic smear campaigns.

Gunsho is alive in his current reincarceration as an uncommercial artist, swillustrator, and originator of upopupulist screen-printed posters such as Waface, Satan’s Syrup, Feedom Demon, Goin’ Native, and the ongoing series, Gunsho’s Demonology.

Gunsho’s Goetia is the first of three books that will compile the massive screenprints of Gunsho’s Demonology.