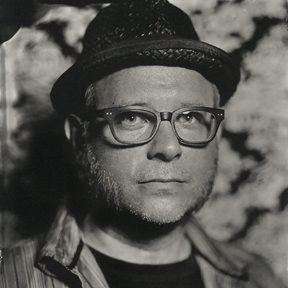 Nick Gucker occupies his nights perched at his art table conjuring up nightmare visions and freakish delights out of ink, charcoal, watercolor and acrylic media.

Nick has exhibited his works in a variety of group gallery shows, from Alaska to Rhode Island to the Pacific Northwest.  In 2014, Nick had his first solo show at Spectrum House in Georgtown, WA called “A Compendium of Curious Creeps”, which ran for two months.

In addition, Nick’s unique; one-of-a-kind custom commission pieces grace the walls, clothing and limbs of various and sundry patrons of the arts from near and far.

His book, featuring illustrations based on the works of
William Hope Hodgson, was release on December 2nd 2016 and is
CURRENTLY UNAVAILABLE